Skip to content
You are here:HomeBilateral projectsRomaniaMedia literacy to fight discrimination and hate speech

A Norwegian and a Romanian organisation are now working together to improve the overall mass media climate by fighting hate speech and discrimination against minority groups.

The project “Digital Literacy for High School Students to Fight Hate Speech and Discrimination in the Media” aims to contribute towards the education of high school students in the spirit of tolerance and inclusion. It develops media competences that will allow them a critical reception of the media discourse, as well as a responsible presence in the public sphere, as “online content generators”. The courses for high school students (country-wise this age group is identified as being highly intolerant) held in 10 cities of Romania are doubled by courses for teachers and journalists, bloggers and civic activists in the same communities. With the support of the teachers, civic activists and journalists/bloggers, the students will plan and run advocacy campaigns aimed at fighting discrimination and hate speech in their community, thus practicing models of public participation and citizens’ empowering.

The project is run by the Center for Independent Journalism (CIJ), in partnership with Norsensus Mediaforum (Norway).

“The project tackles three crucial issues in a modern democratic society: Human rights, media literacy and civic participation. In this sense, the project has the potential to turn the vulnerability of Romanian society into opportunities. The young people will understand the components of quality media products and will have the ability to act as responsible content generators and human rights advocates”, says Director of CJI, Ioana Avadani.

“This is a project that has multiple impacts on both social and civic developments of Romanian teenagers and professional skills of the teachers and journalists. This is an important social investment in the bright future of this beautiful country. So, we are very excited to be part of this promising and crucial initiative by CJI, said Vedat Sevincer, the project manager at Norsensus Mediaforum.

The project was officially initiated in April 2014. The role of the Norwegian partner is to secure the know-how transfer in the field of media literacy programs for youth. The Norwegian team has already visited Romania to collecting information about the context. Afterwards, they designed the content and structure of a training program for three groups (students, teachers and journalist). They have also created training materials and toolkits together with the Romanian team. The first of the training program was held on 10th-11th of May in Bucharest for the first group of students. 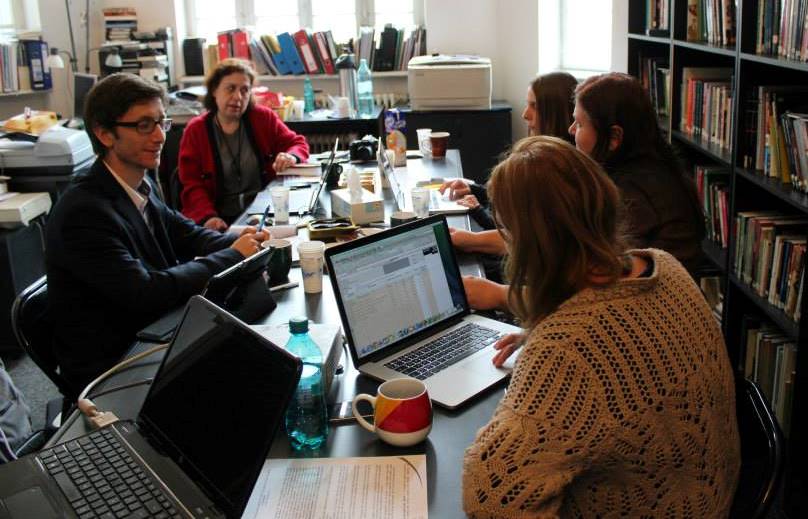 CIJ has also organised courses in other cities throughout Romania. About ninety students and teachers attended the training sessions. “The courses are very practical and interactive, which is rather different from what the participants are used to, hence their interest is very high. As a remark, common to all four courses so far, initially the students do not know what exactly to expect, as the topic – discrimination/ hate speech – is almost totally unknown to them. As the course unfolds their interest and participation has grown bigger, as revealed by the evaluation questionnaires. Again, a common remark, the students underlined the fact that the course completely changed their opinions and helped them see things in a totally different light,” Ioana Avadani says.

“During our visit to Romania, we have been introduced to the current political, social and cultural conditions in Romania, and challenges in media landscape, ethics, anti-discrimination, the issues about the responsible internet and social media use among the youngsters, the educators’ and policy makers’ competency and approach toward these issues. Moreover, we got chance to learn about volunteering and civil society in Romania,” explains Vedat Sevincer from Norsensus Mediaforum.

The Romanian organisation contacted the Norwegian organisation after they found out about their activities and their organisation on the internet. They proposed to have a joint project together. Despite having formed the partnership only recently, they have managed to build a constructive relationship. The Romanian partner organisation is a very experienced NGO which has been actively involved in local and international projects for almost 20 years. According to Vedat they have managed to build a very constructive dialogue together and for these reasons haven’t had any managerial or communicational issues. “If we need to name one, the only issue is about the slight time difference between the two countries and it sometime leads to stressful moments when there is a deadline,” Vedat explains.

The advantages far outweigh this minor challenge. The most important added value of having a foreign partner is the enormous opportunity of learning from each other. For Norsensus Mediaforum it is interesting to work together with CJI as they are a well-established organisation which has a vast experience in the field of media literacy and advocacy issues. Through this partnership, they get a chance to combine their expertise and experience. They get to know different approaches and get new ideas. The partnership creates a platform for organisational and knowledge development for both NGOs. “Moreover, it is an eye opening and exciting experience to see the differences and similarities in the two countries and the approaches developed out of this diversity. To be open for learning and enjoying this diversity have allowed us to minimize the challenges so far,” concludes Vedat.