On 16-17 April 2015 Indrė Rutkauskaitė, head of the project The Bagel Shop: tolerance campaign against public occurrences of anti-Semitism and hatred, implemented by the Jewish (Litvak) Community of Lithuania, and Agnė Žilinskaitė, project’s assistant visited Oslo. They met with the partners of the project – the Jewish Community of Oslo. The Bagel Shop, whose main aim is to encourage tolerance and prevent anti-Semitism and public hatred, seeks to strengthen coalitions of Lithuanian human rights organizations at the international level. The partnership between the Lithuanian Jewish Community and the Jewish Community of Oslo is one of the examples of successful international cooperation.

Sensitive to expressions of discrimination in society and observing the growth and spread of a difficult-to-control culture of hatred, derision and bullying, the Lithuanian Jewish Community is convinced that one of the most effective measures for the prevention of hatred directed at “the other” is education and the dissemination of positive information.

People of other races or ethnicities and other faiths are the most frequent victims of hate in Lithuania. Statistical data from 2010 show that of 213 pre-trial investigations initiated over criminal acts of this kind, 36 investigations were connected with incitement of anti-Semitism, and hatred towards different ethnic groups. That is why The Bagel Shop project is so important. The bagel concept is playfully attractive and memorable as well as having a symbolic sense in connection with Jewish culture. The bagel as symbol of tolerance is employed for the following reasons:

• Nostalgia: the older generation will recall the small Jewish bakeries in pre-war Vilnius and other cities. Even the smallest Lithuanian town had a bagel shop where, besides food, visitors could acquire all the latest news in town;

• Commercial, or popular: Outside Lithuania the bagel is popular, universally known and recognized as part of the Jewish culinary legacy, or at least as a Jewish food. Bagels are sold in cafes and shops. In cafes they are served with coffee and other drinks, and such cafes are popular around the world;

• Traditional pretzel: The word “bagel” comes from the Yiddish word for pretzel, beigl. It is truly a common Jewish word but has never penetrated into the folklore or lexicon of the Lithuanian language.

In Oslo the guests from Lithuania were greeted by the Oslo Community’s Vice-President, Mr. Marty Bashkevin and other members of the Community. The Jewish Community of Oslo is situated in the city centre, next to the famous synagogue of Oslo, built in 1920. The synagogue became famous on the 21st of February 2015, when the Muslims of Norway surrounded it by creating a protective human chain, reacting to anti-Semitic attacks in other countries and wishing to support the local Jewish Community. Around 1200-1400 people participated in the demonstration. 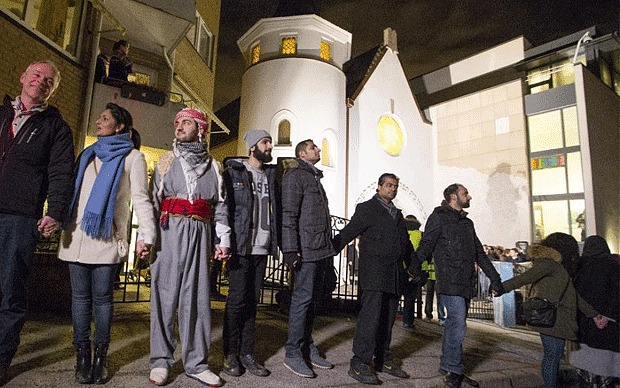 During the meeting Mr. Bashkevin presented the Jewish Community of Oslo, its structure, vision and activities to the guests. Currently the Community consists of 750 members. Even though it is not big, the Community is very active, especially in implementing national and international projects. Few years ago it was noticed that the most active members of the Community were senior. They then successfully implemented a project aimed at making the Community more attractive and engaging for people of different ages, including youngsters and young families. Today the Community has active young volunteers, has a kindergarten, and a Jewish cultural school for older children.

The visiting guests from Lithuania shared their experiences gained through running The Bagel Shop project and also invited Mr. M. Bashkevin to participate in the special ability-strengthening training and “Bagel” tolerance awards to be held in the Government Office in Lithuania on 4-5 June. The invitation was kindly accepted.

The meeting with the Jewish Community of Oslo allowed comparing the experience of both Communities and both countries in the sphere of human rights, taking each country’s unique social and cultural context into consideration; discussing problems and challenges, related to the protection of human rights. During its visit in Oslo “The Bagel Shop” team sought to get acquainted with the experience of project’s partners, establish new connections for possible future activities of the project, strengthen cooperation at the international level and make project’s experience visible in foreign. The knowledge and skills gained in Oslo will be used in planning continuous activities, promoting tolerance and combating anti-Semitism.

The visit also provided an opportunity to compare the scale of the problem of anti-Semitism in both countries as well as means implemented in order to combat this negative phenomenon. During the discussion it became clear that both communities are directly influenced and strengthened by such factors as organizational visibility in the public sphere and unity in common activities. Because of this this it is essential to constantly communicate, discuss, share the good practises and seek to find common goals and strategies which will allow protecting human rights and spreading democratic values more unitedly and more effectively.

The visit and The Bagel Shop Project are funded through the NGO Programmes of the EEA Grants in Lithuania.

Article adapted after original by Indrė Rutkauskaitė, Agnė Žilinskaitė. First published on www.ngonorway.org on May 20, 2015.