EEA funds are aimed at thematic priorities and program areas. Priorities are in line with national needs and broader European goals. All programs that receive support are based on principles related to human rights, good governance, sustainable development and equality. With support from the NGO programs under the EEA funds, Amnesty Norway has been a partner in three different projects together with Amnesty International Poland, Amnesty International Czech Republic and Amnesty International Slovakia. Each project has had a specific and targeted focus in compliance with the principles on which the NGO programs are based on.

In Poland, the project “Together we are strong: STOP DISCRIMINATION!” was carried out. The project started in September 2014, ended in April 2016 and was nationwide. The main objective has been to raise awareness of discriminated groups in the Polish community and mobilize the local community to take action for local changes. Engagement of youth through social media has been a key element of the project. The activities have encouraged active participation among young people and promoted individual engagement among the different target groups: schoolchildren, activists, voluntary organizations, the media, discriminated and vulnerable groups and society as a whole. To be a successful nationwide project, it was necessary to develop good tools and materials that could be used and spread. Therefore, educational material, a script for workshops for teachers and educators were developed as well as infographics and posters produced to support the work through social media. Through this, 80 school projects against discrimination were planned and implemented in communities across the country. 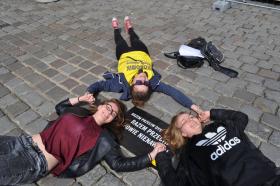 Living library in the Czech Republic

In the Czech Republic, the project “The Amnesty International Living Library – With Openness Through Reading” was conducted. This was also a two-year project, implemented from April 2014 until April 2016. The project has been aiming to raise awareness about and expose negative attitudes such as racism, discrimination, xenophobia among students from primary school and all the way through to university. The project has been comprehensive and carefully planned, with much thorough preparation in the form of training of volunteers and lecturers. The idea has been to have “live books” for lending. Students could visit the “library” of “living books”, lend a “book” in the form of a person and have in-depth interviews in small groups with this person. Each “book” was a representative of a vulnerable, marginalized group characterized by negative stereotypes in the Czech community, such as Roma, LHBTI persons, Muslims, refugees, homeless people, etc. An additional element for the project has been human rights seminars for teachers who not only focused on topics such as discrimination and racism in the curricula, but also focused on questions about how to respond to xenophobic, discriminatory and extremist expressions and behaviours from students and their colleagues at school. 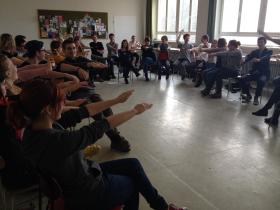 Read more about the project here.

In Slovakia, the project “My World – My Rights” was conducted between September 2015 and January 2016. The project has aimed at giving young people the necessary skills to create positive attitudes toward minorities and to help them understand, support and protect human rights. The project has focused on establishing long-term relationships between trained lecturers and a selection of classes through regular meetings where relevant topics were discussed. The topics for meetings and workshops were chosen by the students, which strengthened their ownership of the project and contributed to greater engagement to developing and carrying out their own activities to promote and protect human rights.

Article based on Project Partnerships through EEA and Norway Grants published by Amnesty Norway.

All images published with permission from Amnesty Norway.